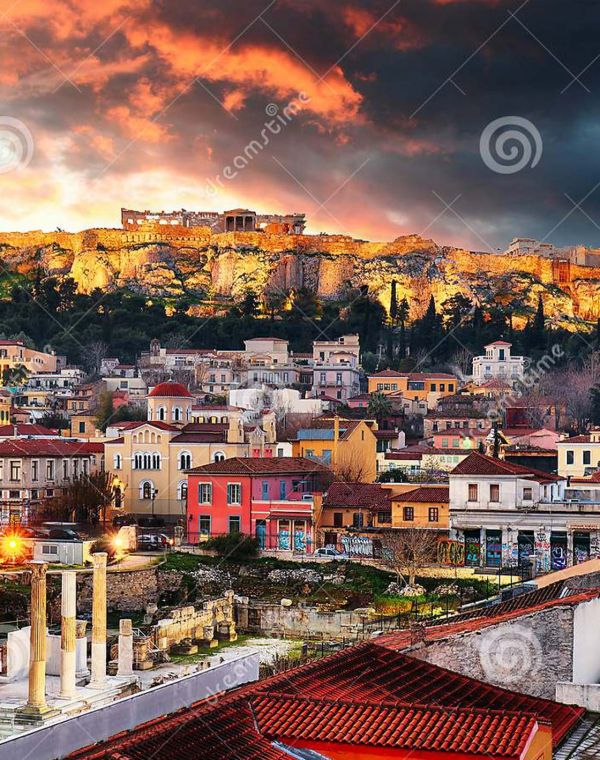 Athens is the historical capital of Europe, dating from the first settlement in the Neolithic age. In 1834, it became the capital of the modern Greek state and in two centuries since it has become an attractive modern metropolis with unrivalled charm.

A large part of the town’s historic centre has been converted into a 3-kilometre pedestrian zone (the largest in Europe), leading to the major archaeological sites (“archaeological park”), reconstructing – to a large degree – the ancient landscape. The “core” of the historic centre is the Plaka neighborhood (at the eastern side of the Acropolis), which has been inhabited without interruption since antiquity. Syntagma and Omonia are the main central squares of the town; they are linked by Stadiou Street and Panepistimiou Avenue, along which some of the town’s most beautiful Neoclassical buildings have been erected. Thanks to its rich morphology Athens has plenty of places where you can admire stunning panoramic views of the city. Romantic or not, let yourself be captivated by the Athenian cityscape as seen from above. The southern suburbs, located on the coast of the Saronic Gulf, a recreational and cultural park is being planned, comprising the existing sports facilities. They offer many opportunities to take a walk along the seaside, while you will also find many beautiful organized and free beaches, large shopping centers and nightclubs (especially during the summer). Moreover, if you wish to leave the centre behind you, you may visit, amongst others, the neighboring town of Piraeus, Greece’s main port (which nowadays forms one big conglomerate with Athens). In Athens and the wider Attica area, you will find hotel accommodation of high standard, modern means of transportation, a wide choice of opportunities for shopping, dining and nightlife, good service but above all the hospitality and warmth of its inhabitants. In a nutshell, Athens is a city that fascinates every visitor, during all seasons.